SIMPLIS - The Rest of the Story

SIMPLIS achieves its speed by modeling devices using a series of Piecewise Linear (PWL) straight-line segments rather than by using the SPICE technique of solving nonlinearities such as exponential expressions.

Here we compare a Spice model (in red) of the current vs. voltage characteristic of the body diode of the Si4410DY NMOS Q1 with a SIMPLIS PWL model (in blue). SIMPLIS uses a PWL Resistor to model this diode characteristic. 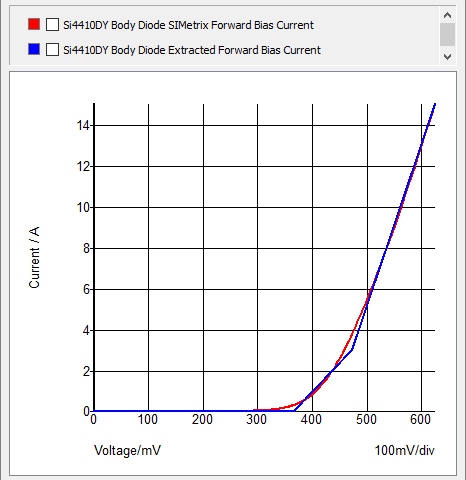 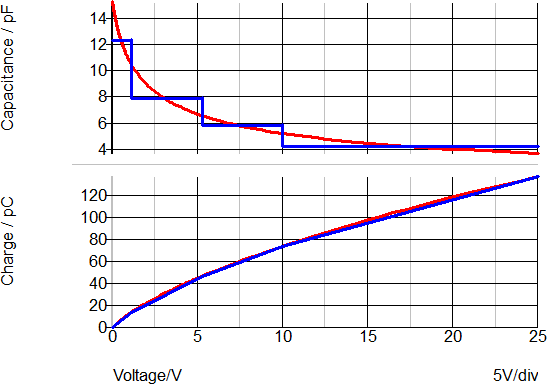 The lower graph shows the charge versus reverse voltage with the SPICE model in red and the SIMPLIS model in blue. Although the error between points on the capacitance curve appears to be large at certain voltage values, the error between the two charge curves is quite small. In most switch-mode applications, the total capacitive charge versus voltage characteristic is the dominant factor in determining device transitions from a conducting state to a blocking state and vice-versa. Consequently, PWL capacitors can be used to accurately represent junction capacitances in switch-mode power conversion applications.

Because PWL modeling is a bit unfamiliar to many first-time SIMPLIS users, it is not uncommon to confuse piecewise linear modeling with the creation of idealized models. And while PWL modeling easily supports the creation of idealized models, it can also be the most accurate practical method of modeling the switching losses in DC-DC and AC-DC power supplies. In the next example, we modify the model level of Q1 in our buck converter from model level 0 (an instantaneous switch with an ON resistance and an OFF resistance) to model level 2, which models the nonlinear Gate-to-Drain and Drain-to-Source capacitance on the MOSFET as well as the active region of the device. In this fashion, we can model the switching transitions of a MOSFET with a high degree of accuracy. 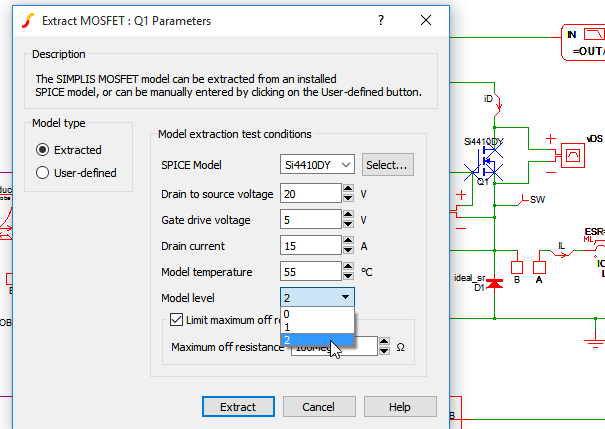 Click to download a Buck Converter Schematic where the MOSFET model of Q1 has been changed to level 2.

Run the default simulation. It is set up to run a Periodic Operating Point (POP) analysis to find the steady-state of the system. In the waveform viewer click on the tab labeled Power(Q1). This tab plots the Gate-to-Source voltage vGS, the Drain-to-Source voltage vDS, and the Drain current iD waveforms of Q1. We also see plotted the Gate current iG as well as the instantaneous power dissipated in Q1. Zoom in on one set of ON-OFF transitions as shown here. 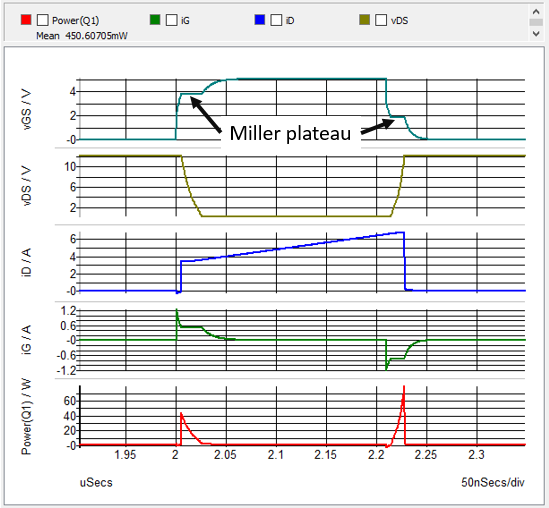 We can see the Miller effect evident in the finite transitions of these waveforms, including the Miller plateau on the vGS waveform during both the turn-ON and turn-OFF transitions.

The following link is a good executive summary of the accuracy of PWL models in SIMPLIS.

In this summary, SIMPLIS simulation results are compared with lab measurements for:

While achieving very accurate results, by employing PWL device models in this way, SIMPLIS can characterize a complex nonlinear system as a cyclical sequence of piecewise linear circuit topologies. This method of handling power-supply system nonlinearities is typically 10 to 50 times faster than Spice and avoids the convergence issues inherent with Spice type approaches. Not only does this method generate an accurate representation of the closed-loop performance of a typical switching power system, but we also see that SIMPLIS can accurately predict the detailed switching transitions of those semiconductor devices functioning as high-frequency switches.

Next, we explore how we can exploit the accuracy and speed of SIMPLIS to model much more complex topologies than would be feasible with SPICE-based approaches. The next circuit example of a single-switch dual-output forward converter with coupled output inductors demonstrates this point.

Run the simulation by pressing the F9 key or clicking on the Run Schematic icon. This schematic is set up to do a POP analysis, followed by a Bode Plot and then a step load transient on the main output VOUT1.

Note that the AC analysis is performed on the full nonlinear time-domain switching circuit. There is no need to derive an average model to perform the AC analysis. 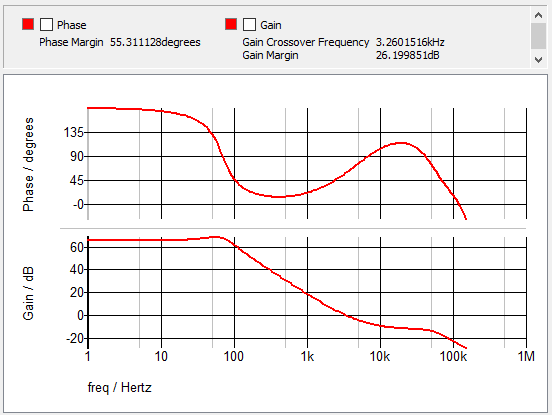 The speed with which SIMPLIS simulates this large and quite complex schematic demonstrates one aspect of how SIMPLIS makes it practical to do in-depth design verification before the first hardware models of a design are built.

Another way that SIMPLIS speeds up the simulation process is with the POP analysis.

What SIMPLIS POP Does

The SIMPLIS Periodic Operating Point (POP) analysis excels at finding the steady-state ON-OFF limit cycle of a stable periodic switching system. The SIMPLIS POP analysis can accomplish this much faster, more accurately and far more repeatably than by running a long time domain transient simulation. The high accuracy of the POP analysis enables practical loss analysis and also enables small signal AC analysis based on the full nonlinear time-domain simulation model. Useful loss analysis and AC analysis require that the system be in periodic steady state in order to achieve accurate and repeatable results. Because of its uniqueness to SIMPLIS, POP analysis is one of the more challenging, but also more rewarding aspects of SIMPLIS to master.

The Dual Output Single Switch Forward Converter Schematic is an excellent example of how SIMPLIS can find the steady-state operating point of a complex power supply system very quickly and accurately.

Understanding how the SIMPLIS POP analysis and the POP algorithm work is critical to receiving the maximum benefit from the SIMPLIS simulation capability.

To find steady state, POP simulates the system in the time domain by performing these tasks:

In practice, once POP has found the steady state of a switching system, the largest difference between two successive snapshot values for capacitor voltage or inductor current is in the range of 1.0E-10 % to 1.0E-13 %. These are miniscule errors compared to a typical RELTOL in SPICE of 1.0E-3.

In a system with a reasonable set of initial conditions, the SIMPLIS POP algorithm iteratively seeks the following conditions to arrive at a steady state.

This SIMPLIS POP algorithm works best in finding the steady-state operating point of switching time-sampled systems such as the following:

In the overwhelming majority of system measurements, the reference point for the measurement is an initial steady-state periodic operating point. Since in a typical design project, the designer runs several thousand simulations, being able to reduce the amount of CPU time required to get the system into steady state pays off in time saved for the engineer. If the time to reach steady state can be reduced from 10 minutes to 10 seconds, the time savings runs into hundreds of hours over the life of a project.

Because SIMPLIS can run so many simulations in a relatively short period of time, the SIMPLIS POP analysis makes serious simulation analysis feasible for switching power supply systems. Without POP, only a cursory set of simulation analyses can be run in the practical time allowed. POP, however, makes possible exhaustive system performance characterization during the design process. As a result, the majority of design errors can be detected very early in the design process. Detecting errors before the design has been committed to hardware is the best time in the design process to detect design errors because then they are least expensive in time and money to correct.

Because of the speed and accuracy with which the piecewise linear SIMPLIS POP analysis can find steady state means, SIMPLIS AC analysis is possible based on the following two-step process: